A recipe used to paint Rubricae of the Black Legion's Sons of the Cyclops warband - an alternative black to my Black Legion Gold method. 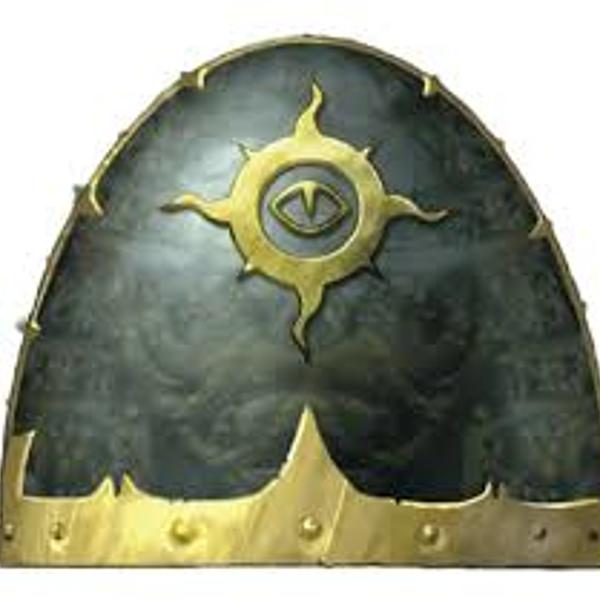 The idea of this is recreate the mottled, blackened armour appearance as it appears on the codex entry for the Sons of the Cyclops. I'm using the existing Black Legion Gold method for all of the gold areas, but use Black Templar as the main black colour over Retributor Armour . The method is to get quick coverage of black, tidy the gold edging (before moving on) and then use a mixture of blacks and the gold highlight colours to stipple and mottle the armour panels - dark recesses, with apparent muted gold patterns in raised areas. For the Sons of the Cyclops icon, I use the Mark III Heresy transfers (white) that I paint gold to match the Black Legion transfers on the left shoulder pad. I'll also use the white scarab transfers on the tabards, as I prefer red tabards to the white of the artwork (to tie to the rest of the Black Legion force). I do keep the green eyes of the original Thousand Son scheme to differentiate these as Rubricae, rather than living Chaos Space Marines.

Rather than the highlight and finishing stage, the new method I have uses a mixture of Nuln Oil Gloss , Cryptek Armourshade Gloss and a tiny dot of Liberator Gold (or Vallejo Old Gold). Basically, it's a shiny dark brown wash, that dries glossy with metallic flecks. It has the advantage, over very quick layers, to build glazed highlights towards the top of the panel by providing a metallic glossy sheen. It also has the advantage of protecting the Contrast paint, and works as the final shade on my usual gold mix.